Celadon to File for Bankruptcy

Indianapolis, IN – News announced Friday states that Celadon Group may file Chapter 11 bankruptcy this week, this news coming from sources internal. With over 3,200 drivers employed, the company brought in over one billion in revenue in 2015.

Freightwaves reported on Friday that the carrier based out of Indianapolis would be the largest trucking company to file for Chapter 11 in the history of the United States. Customers of the trucking giant have been notified of the bankruptcy.

According to Freightwaves, the cause of the companies downfall was due to defaulting on Celadon’s agreement between its lenders. The company started off it’s week with little funds in it’s accounts to keep operations going.

The company was in negotiations between it’s two lenders Blue Torch and Luminis to secure further funding. Unfortunately this fell through as of Thursday morning over discussion of the companies collateral.

This isn’t the first time that the trucking company has been in hot water financially. According to CDLLife, two former executives at the company will be facing charges related to fraud.

Celadon’s drivers run the risk of being abandoned over the road like we have seen in the past when Falcon transport went under. Sources could not be certain that the companies drivers will get home. Also stating it would be a good idea to fuel their trucks while their fuel cards are still active.

The companies fleet currently consists of 2,695 trucks. This includes 2,000 in the US, 335 in Mexico, and 360 in Canada. The company heavily relies on automotive freight and runs loads from Laredo, TX to the Midwest. Truckload companies in the same sector are likely to benefit if Celadon stops operations.

The History of Celadon

In 1985, Steve Russell founded Celadon and started hauling automotive parts from Mexico into the United States. Under his leadership the company grew and took it’s place in the top ten largest carriers in the country.

Russell unfortunately passed away on April 15, 2016. The cause of his death wasn’t immediately clear.

Russell relinquished his role as CEO in 2012 and then his role as chairman in 2015. Russell passed these roles on to Paul Will, an executive at Celadon.

A certified public accountant, Will, left his position July 2017 and was replaced by Svindland shortly after.

This is the Largest Trucking Company Bankruptcy in US History

The truckload industry as a whole has fallen on hard times. The price of freight has dropped over the past few years.

Accompanied by a decreased volume of freight, this leads to struggle among many truckload companies.

Celadon’s Chapter 11 bankruptcy is one of the largest in US history.

As of right now Celadon’s fuel cards are active per their safety department.

As the looming closure of trucking giant Celadon moves closer, there is a light that has shown through.

Trucking companies and vendors alike have rallied together to make sure Celadon drivers have a way home. These companies have even offered “no strings attached” bus tickets home.

Some companies have even offered to pay for unpaid mileage if Celadon ends up unable to pay their drivers.

Rival Companies Coming to the Rescue

CRST, a truckload carrier based out of Cedar Rapids, IA announced they are willing to help.

The company announced on it’s facebook page yesterday that they are willing to assist drivers in need. They currently have local, regional, dedicated and Over-The-Road positions available.

CRST also stated that Celadon drivers that are unable find a way home can call them at 866-821-4968 and will receive a bus ticket home.

Hirschbach Motor Lines, Inc., a carrier based out of Dubuque, IA have offered a helping hand.

They have also announced that they have open positions and are willing to help Celadon drivers if the need arises.

Drivers can contact Hirschbach at 402-404-2018 for inquires about open positions with the company. Drivers can also request a free bus ticket home.

US Express, a trucking company based out of Chattanooga, TN is offering the following to those driver in distress.

Travel reimbursement to their nearest facility, up to $750.00 reimbursement of miles not paid. Bus ticket to their nearest location, $50 personal item replacement for items drivers may have had to leave behind, with receipt. A Guarantee that drivers will be home for the holidays and have at least 80% of new drivers seated within 3 days. They will also provide a $25 store credit to buy clothing if needed upon hire.

A group put together by Teddy’s Trucker’s Association on Facebook has seen an outpouring of support. This coming from smaller carriers and individuals associated with the trucking industry.

The group is called Celadon Closure Assistance and Jobs. Drivers may join this group and see what opportunities are available to them. In the latest post by an administrator of the group, it appears there is an unconfirmed report that Celadon may be working on a way to get their drivers home. 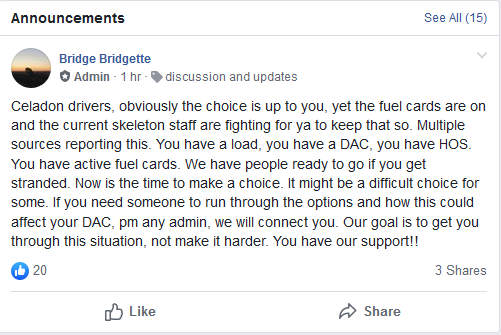 We’d like to personally thank every company and individual that has offered their help. This is a confusing situation, even more so for Celadon drivers.

Celadon has officially announced that the company has filed Chapter 11 bankruptcy.

In an expected but unfortunate message over their qualcomm units. Celadon drivers received the following message: 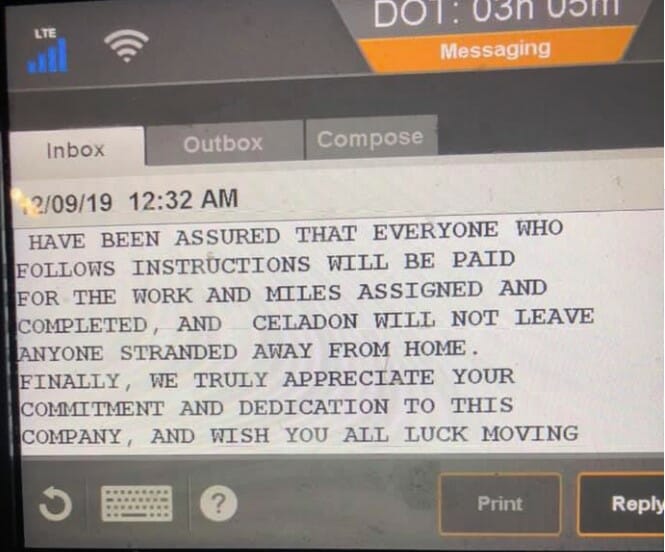 It’s reassuring to hear that Celadon management will not leave any driver stranded. If for some reason you may be in this situation, we encourage you to join the group above on social media. There are thousands of helping hands available in this tough time.

Currently, all company fuel cards are on. Instructions for drivers are to continue to deliver their loads as planned.

As awe striking as this is, a Trucking giant has closed it’s doors forever. Displacing thousands of workers who will wake up to this message.

As we close the book on Celadon’s slow demise, we hope all of their employees are taken care of this holiday season.

What are your thoughts on Celadon’s bankruptcy and closure? Was it handled properly?