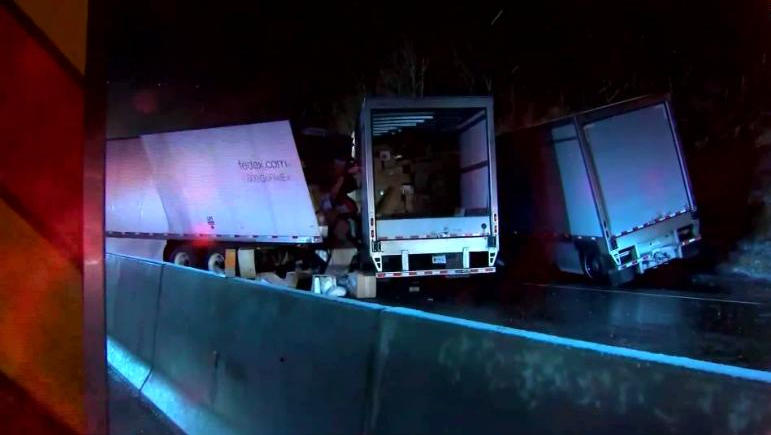 At least five people were killed in a crash happening on the Pennsylvania turnpike around 3:30 a.m. The crash closed the turnpike between exits 75 and 161 going both directions.

Officials say a bus traveling downhill failed to make a corner then went up an embankment and rolled. The bus was then struck by two semi-trucks which were then struck by a third truck and trailer.

The bus was traveling from New Jersey to Cincinnati and the majority of the passengers spoke Spanish or Japanese. Translators are assisting injured parties communicate with medical personnel and law enforcement.

The PA turnpike will remain closed to traffic in both directions. Officials are optimistic that traffic will resume by the end of the day.

“Crash involves 2 tractor trailers, a tour bus and passenger vehicles. Turnpike is closed in both directions from New Stanton (#75) to Breezewood (#161). A prolonged closure likely,”

Over 60 People Injured in Turnpike Crash

Five people were found dead at the scene said County coroner Ken Bacha. Around 50 more people were injured in the accident as well.

Forbes Hospital in Monroeville, PA is currently treating 11 patients from the crash. 10 patients are in stable condition and one being in critical a spokeswoman said.

The cause of the crash is not currently clear although according to Weather.com meteorologist Christopher Dolce stated there were snow showers moving through western Pennsylvania this morning. 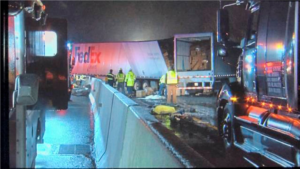 National Transportation Safety Board to Investiage

The NTSB announced that it will send over a dozen people to the are of the crash to investigate. They made this announcement on twitter as seen below.

Rene Colborne, a spokesperson for the PA Turnpike stated that road conditions seemed to be “fine” and the roads were treated.

Images circulating show a passenger bus and several semi-truck’s and trailers that were damaged in the incident.

FedEx has stated that:

“First and foremost we extend our deepest condolences to the families of the individuals involved in this accident. There is no higher priority for FedEx Ground than safety, and we are cooperating fully with investigating authorities at this time.”

UPS also indicates that one of their own was involved in the accident and issues this statement:

“UPS is cooperating with authorities in the investigation and we express our deepest sympathies to the victims and their families and friends.”

This is an ongoing story, we will update as information is made available.